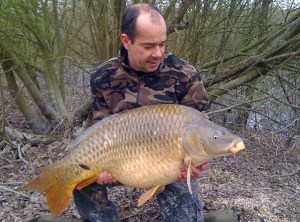 Seddik with his new PB common at 42lb 10oz

Well the season is on us and most anglers are turning their thoughts to coming to France for a session. I’ve been busy preparing the venue but have been able to take some time out while I can to have a dabble myself. It’s just too tempting in the lovely weather we have been enjoying in northern France for the last few weeks.

So it was that when a French mate Seddik expressed interest in doing a 48 hours on the venue I thought I’d join him.
Now I’d seen a fair few fish moving down by pegs 11 & 12 so it was here we decided to start.  I set up in 11 while Seddik went into 12.
Straight away it was obvious there were fish in front of us. Some were cruising and odd one boshed out in front of our swims.
Seddik placed his baits along the left hand margin with one other straight out to the open water. One of his margin rods being a zig popped up about 1.5m. For my part I managed to find the gravel bar in front of peg 10 and place one bait there, another popped up too 1.5m on the plateau and the final bait dropped in the margins.
After a BBQ with my wife and step-daughter we turned in for the night. I’d not long climbed into the bag when I had a drop back on the gravel bar rod. Winding down I finally made contact with a fish and banked a nice clean mirror that weighed in at a tad under thirty at 29lb 10oz. Not a bad start after only a few hours. The night proved quiet on our rods but loads of fish were crashing out, even right over my margin rod. It was difficult to sleep.
Eventually after a few hours sleep I was up making coffee when Seddik had a screamer on his zig rigged rod. His prize was a cracking PB common that went 42lb 10oz.
The day was quiet and I reeled in and got on with working on the lakes. I came back later afternoon and no more fish had been banked. After dinner I managed a 26lb catfish on the zig rig, and another very hard fighting cat of 42lb just after dark. This fish put my new Free Spirit Hi S rods through their paces and were easily upto the job.
As it came on to rain quiet hard the fish seemed to stop showing. But as we packed up in the rain the next morning, never much fun… we were well pleased with our short session.

One Response to 42lb 10oz Common from the Tortue.