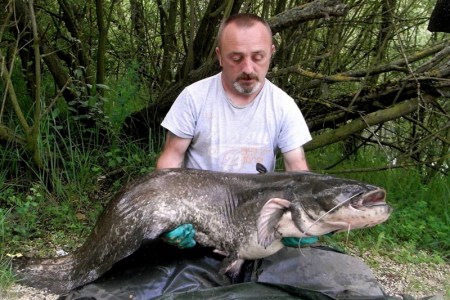 Welsh angler Ceri Howells set his stall out for the lake’s big cats during his session at the venue in early July and ended up with a bumper haul.
Venue regular Ceri was fishing from the very productive peg 12 at the far end of the complex, on the Tortue lake. Conditions were fairly poor for carp with hot sunny days and high pressure, even if several good fish did come out during his week. But the catfish decided they wanted to play and Ceri did not want to miss out on the feeding spree.

His tactics were, to  say the least usual. Instead of the more conventional halibut pellet or fishy boilie approach, Ceri opted for a large bunch of maggots. Now by, large bunch of maggots, that’s exactly what I mean. He was threading over 150 of the little wriggling baits onto a length of dental floss which, in turn, was tied to the D rig hook set up. Using a bait boat to present the hookbait and more maggot fee offerings over his zone, he certainly found a very effective way of attracting and catching these giant moggies.

He banked nearly 30 large fish during his week, topped off by a  fish over 90lb, which is the largest landed so far this year.