Another Nice January Brace and a Monster Crucian 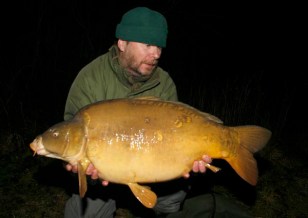 I managed to get out again this week for an overnighter and once again got amongst the fish. Since my last trip a week ago, in unusually mild conditions we’ve had something of a cold snap the last few days with several heavy frosts, and cat ice in the edge of the lakes. I’d guess the night time temperatures got down to -6°C.
So Wednesday morning, with the frost still on the ground and ice still in the edge, I set up on the Peg 14, where I’d managed the fish last week. I reasoned that if they were active they may still come on the plateau in the Tortue to feed.
Again tactics were the same, a PVA bag of pellets and chopped boilies & some 14mm Quest Pineapple, with a Pineapple/Crab snowman combination.
As we settled in, things didn’t look anything like as promising as the previous visit. There I’d seen activity right away, but here with a cold wind and spitting rain, nothing was visible. 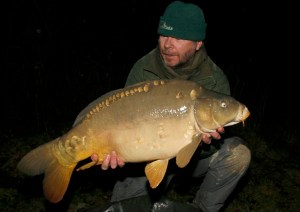 With my mate Laurent we settled back in the shelter of my tarp to enjoy a couple of beers and some dinner. As the night and the cold came in we decided to call it a night and Lolo went off to his bivvy, while I climbed into my comfy hammock and was soon out like a light., wrapped in a toasty down sleeping bag.

I was awoken around 2:30 am by a couple of beeps in my central rod. Before I could get out of my bag and put my boots on the fish was motoring. Once I made contact it plodded a bit but came fairly easily to the net.
It turned out to be a nice clean looking mirror of 29lb. I was well chuffed, as I really thought with the frosts I’d missed out on the feeding fish. After recasting as I lay back in my bed listening to the rain patter on the tarp a large carp turned over in the margins with a big splash. Less than an hour after the first fish, I was off again. This one really did motor. It had taken probably 30 or more yards of line before I leaned into it and continued to pull hard once I had made contact. It gave a spirited fight before going into the net. A smaller fish this one at 25lb 8oz.
Anyway another bag was lobed back out into the blackness and I was off to the land of nod, waking at after 9am when Laurent popped his head into my swim and looked chuffed when I suggested coffee. 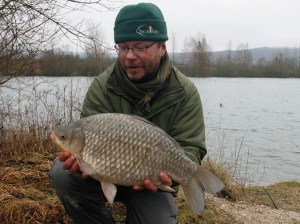 A couple of cups each later and we were talking of packing up… Two Dutch chaps came round for a chat, and my centre rod dropped back before tightening up again. I struck but with 3.5lb rods only felt a slight resistance. I suspected one of the large bream was the suspect…. But no it one mighty big Crucian carp of 7lb 8oz. The biggest one I have ever caught.

I was well pleased to get a couple more nice carp. I’ve only rarely fished the winter’s here, but have always done quite well. This year looks to be no exception.