Best time of the year to go to France 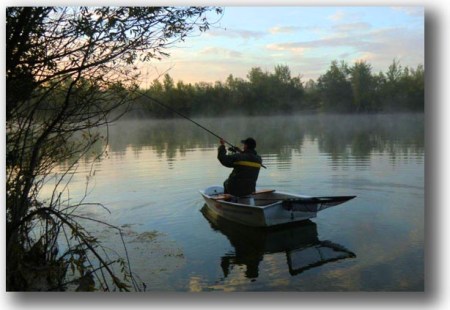 This is a question I get asked frequently and really depends on a number of factors, so there is no single answer that is applicable to all fishing situations.

Weather : I think the number one factor on the likely catch rates of any venue is the weather. As carp are cold blooded creatures they will naturally slow down and feed only sporadically in the colder water. As we’ve seen with winter fishing you can catch fish, but don’t expect to have much action.
The weather and more particularly the sun and its warming effect on the surface layers, can see the fish moving even early in the year. Once the Winter is over the increase in water temperature really is the key to regular feeding and hence more consistent captures. It is worth then getting on Metcheck and keeping a close eye on the weather conditions. Each year is different and often the length and severity of winters is on a cyclical basis.
The same holds true for all the seasons, as once the water gets too hot the fish often go into basking mode and can be see cruising in the upper layers and evidently not the slightest bit interested in feeding. This can often be the case in July and August where many areas of France can see prolonged periods where the temperatures are well into the 30’s.
At the end of the year it’s the same story in reverse. The rapidity with which winter onsets will have a knock on effect to fish feeding. In 2009 we had remarkably mild conditions in November and the fishing remained excellent until winter set in in early December.
Lakes depths & Flood Water : Another critical factor is the average depth of the water you intend to fish. It stands to reason that the deeper the lake the slower the water will warm in the spring and the slower the fish will be to really start feeding. Add to this the fact that many fish will seek out the warmer layers in the lake (often near the surface) and one can see why a bait placed in cold, deep water is less likely to get picked up. Some lakes simply don’t have shallows so the spring time can be very slow.
I have always found that early in the year the shallower the venue the better the early season results. This has the inverse effect in high summer when the shallow water get too hot to induce intensive feeding and results can be irregular.
The water temperature on the different types of lake will also drop faster or slower in proportion to the depth of water. It can often be a good choice to fish a deep lake later in the season to benefit from the slower drop in water temperature.
Also with global warming many lakes are seeing more and more flooding. This can happen at any period but is more prevalent in the early to late spring when rivers are often in spate and the water tables saturated.

Natural Food: Linked to this weather and water temperature factor is the availability in the lakes of natural food. This will become more abundant as the temperatures rise, and weed growth increases. On many waters then the best period can be the late autumn to early winter when the still active carp suddenly find a less plentiful supply of natural food in the larder. We have the classic ‘feeding up before Winter’ scenario, and catches can often be excellent.

Spawning : “When do the fish spawn?” This is also a question that comes up regularly when people want to know the best time to go fishing in France. This though is also a question that unfortunately doesn’t have a definitive answer. Some lakes see the fish spawn as early as April, while others it might be as late as July. It is linked to the weather and water temperature question already discussed above. It will also depend on the average depth of a lake and the presence or not of shallow, spawning areas, such as reed beds, lilies, weed etc.
During this period the fish will also start to shoal up and concentrate their activity in one area of the lake. Not all the fish will spawn at the same time, and in fact not all the fish will spawn. There will be periods in a given day when activity will be intense, then it will abate for a few hours.
On several occasions I have managed some incredible catches of fish when I have been able to locate them in a spawning area. Naturally the results are not very consistent, nor can they be guaranteed, but when the fish do go on the feed multiple catches are possible.

Moon Phases : I know many anglers who look on moon phases as an important criteria when choosing a time of year or period of the month to fish. You can even get a chart of the current phases off the internet. http://www.moonconnection.com/moon_phases_calendar.phtml
I must admit that I have never really taken much notice of this but I know serious anglers who do so it might be worth taking into account.

Angling Pressure : Finally I think angling pressure is a very influential factor in the feeding of carp. On some of the top French waters the fish are literally fished for 24/7 every day of the spring/summer & autumn. They have lines constantly in their feeding areas and numbers of carp are banked every week.
Often on these waters the catch rates can be very good at the start of the season but tail off after a few months and the fish get more and more stick. Planning a trip early in the year will see you fish a time when the fish have had a winter break, most French lakes close in winter, and thus perhaps have a better chance of a few fish on the bank.
I know that none of this really gives you the definitive answer, but I would resume by saying I’d chose a shallow lake in spring, and a deeper lake in summer of early winter. I would recommend you watch very carefully the weather and chose a venue in relation the weather conditions at the time. No two years are the same so the choice will certainly vary from year to year.