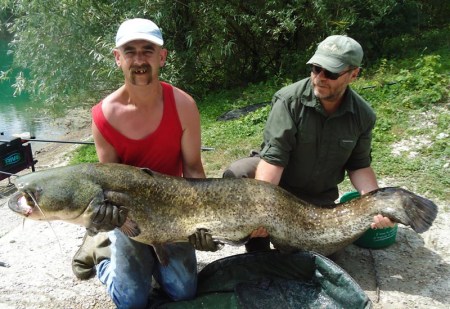 French angler Franck Lassalle banked two giant catfish of 105lb & 108lb in just 24 hours on the Tortue lake using Quest Special Crab boilies.
The carper from the north of France, near Calais returned to the venue this year for a two week session with the aim of bettering the 81lb catfish he banked here last summer during his stay on the venue. This, in fact he managed on the very first day with a whopping fish of 99lb that fell just short of the magical ton. It was though the largest banked so far this year at the time.

Undeterred he continued to bait his spots with Quest Special Crab boilies, and spicy cinnamon & ginger flavoured fish pellets. The hookbait consisted of a 20mm Quest crab boilie topped with a piece of green fake corn as a sight bob.
Following a lunch break Franck returned to his swim and replaced his rods with a baitbait. The run came within five minutes of the being back in the water. The fight which required the use of a boat lasted for 45 minutes by which time Franck was a tired as the fish.

The catfish are offering great sport at present on the venue during the very hot conditions, which have seen daytime temperatures over 30°c most days. The water is also very warm at around 25°C, which has left the carp cruising on the surface but reluctant to feed.

No such problem , though with the large Silurus that seem to gain in appetite as the water warms…

2 Responses to Brace of 100lb Catfish on Tortue Lake