Belgain carper Rudy Coussens enjoyed a successful visit to the Croix Blanche lakes on the first week of September. 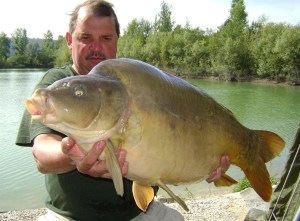 Fishing on the Tortue lake on the now famous peg 13, he banked fifteen carp and a giant catfish. His average was very good with most of his carp going over the 30lb mark with a top fish weighing in at 35lb. Eleven of his carp were over the thirty pound mark.

To top of his haul of fish he also banked a large catfish that tipped the scales at 54.8lb.

His successful tactic was to use his homemade Mexican Onion flavoured boiles fished with a bait boat to ensure spot on presentation in 3.5 metres of water. These baits were introduced on his arrival and left for 24 hours. The fish soon began to roll on the spot. 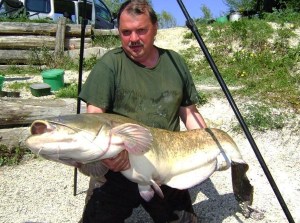 Rudy said “…..the first day ( saturday ) I threw my boilies and waited till sunday to fish on it. The first day the carp started to roll like crazy, but I waited….” In all 13 fish fell to this tactic.