First Forty of the Year 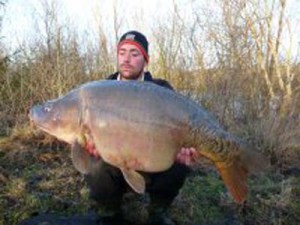 First forty of the year

As I said in my previous blog post, with the mild weather, until now anyway, and relatively high water temperatures the carp have been very active. I spoke about the pair of young Dutch anglers who fished from the 2nd of January.   I now have a couple of photos to add. Here is a brief resumé of their session.
Jimmy Heijink and his mate set up on pegs 5 on the Croix Blanche and 13 on the Tortue. The used a bait boat to drop PVA bags of pellets and strawberry boilies to the shallower areas where fish were showing. The water levels were quite high so that would be around 12 feet deep.
Within 24 hours they had managed several fish to upper 20’s, which is pretty good for a month of January. Despite being mild the weather was quite extreme with gales force winds and heavy rain showers.
The lads stuck it out however, with Jimmy moving up to peg 15, due to the activity he had observed in front of that peg.
The last night saw one more fish out of the Croix lake and the icing on the cake for this early season session a superb 20.5kg (45lb) mirror. 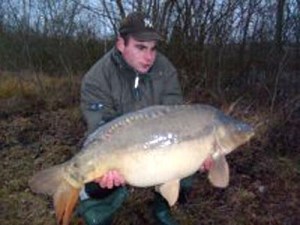 The lads did very well and it goes to show that good results can be had year round in the right conditions. While we saw poor results in the autumn, I sure this was down to the unusual weather. January temperatures were more like November and the carp seemed top respond in the manner of an autumn session.