Last Session for January and my Second 40lb+ Common 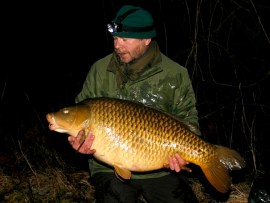 With the weather forecast announcing the arrival of a prolonged cold snap next week, I felt that I had to get back out and do a couple more nights before the cold eventually put an end to the carp’s willingness to feed in winter.

The first few days of the week had been very wet so I was waiting for a 48 hours window of fairly dry weather in which I could wet a line. I really don’t like fishing in the rain. The odd shower is okay, but constant rain I just find depressing.
So Friday dawned bright and dry with a reasonable weekend in sight, and I loaded the car to drive down to the Tortue lake.
I elected to fish the same peg (14) where I’d caught all my fish so far this year. Why change, as the fish were obviously visiting this area? I know from experience they often don’t go far in winter. The water in the lakes was a fairly uniform 6°C. 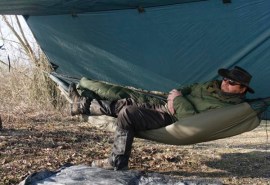 Chilling in the Hammock

I’d made up a half a dozen PVA bags the night before, filled with 5mm carp pellets and broken Proline Red Devil boilies, so getting the lines out was a very quick affair this time. I had been using Quest Baits Pineapple, as I wanted a smaller  & instant bait for winter, but having run out, I only had the lake specials to use. My hook baits were hi viz tutti fruitti pops fished snowman style. I was hoping that a fluoro bait would give me a chance in the day time, as all the fish so far, had come at night.
With the baits in place and the hammock set up I made myself some dinner.  I climbed into the sack at around 8pm. I lay there reading before eventually dozing off.
At about 5am, a couple of bleeps and a steady run, on my left hand rod, signaled that I’d had a take. The fish did nothing special before rolling into the net. At 25lb it was a nice start. I did a couple of pictures and slipped her back. 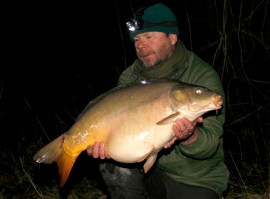 I hooked on a new PVA bag and cast it back out. I had just got back into bed when the right hand rod tore off. After a spirited fight a very chunky mirror was landed. At just 21lb I didn’t bother with a photo and put her straight back.
The day was quiet, spent making up a few more PVA bags and reading my book. The HiViz baits dind’t seem to be making a difference.
Not long after finishing my dinner, I had a fast run on the left hand rod. As soon as I made contact the fish took more line. A sign that is was a better fish. And after a plodding fight, typical of a big kipper in these deep margins, I managed to bank a lump of a common. I struggled up the bank to the unhooking mat. As I hoisted her onto the scales the needle went round to 41lb 8oz. I was over the moon my second forty pound plus common this month. 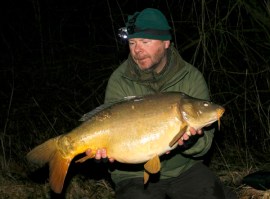 This time the skies were clear, so I was able to take a couple of shots of the fish before I let her go. The rod was cast back out and I was back in the sack, as the night was getting cold early. The skies had cleared after an overcast day with occasional drizzle. I could tell we were in for a frost. Again I’d not long been back in bed when the right hand rod was away again and a 24lb mirror graced the banks.
I then managed to get a few hours sleep, warmly tucked up in my sleeping bag. Around 5am a very large bream woke me up. Despite it being a real specimen, I could feel the cold coming down, so I unhooked it in the edge and got back to bed.

As the sun came up I could see that the morning was indeed clear and crisp, with white frost over the swim and surrounding margins. As I put the kettle on I had to tip the ice out of my cup, and could hear the frozen water rattle around inside my water bottle. Winter seemed to be with us.
Its funny, running the fishery commercially means I don’t really get much chance to fish in the warmer months, and the last three winters have been very cold, with snow and ice for prolonged periods. This year has been a very different scenario, as I’ve already pointed out in other posts. It just goes to show that if you get out there the carp remain catchable.  My tally for the month ws now at 9 carp to 46lb a large Crucian and a bream.
One thing that has puzzled me though is why, bearing in mind the large number og 30lb plus carp there are int he lake, my catches were only modest sized fish or big ones. The same was true for the few clients who have fished here this winter. I guess its just the lottery that is carp fishing!