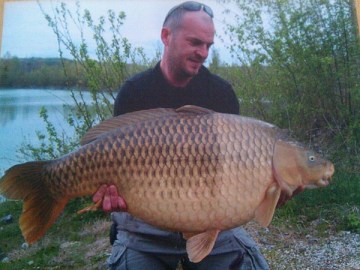 Following the excellent winter results on the venue, which saw a good number of forty pound fish banked, including two to myself, the big freeze that lasted over three weeks put an abrupt end to the feeding spree, and a downer on the fishing and any high hopes I’d have of a productive start to the main season.

One or two of the anglers who had been here in January were keen to get back. This was the case in point of two you Dutch lads Gert- Jan Wijnhorsdt & Sjoerd Wildschut,  who fresh from success in January were back in early March once the lakes were unfrozen.
Fishing the sampe tactics that had been successful to others and to myself they used PVA bags and pellets on the plateau of the Tortue Lake, and in the deeper water of peg 13 to back 8 carp to 17kg in four nights. 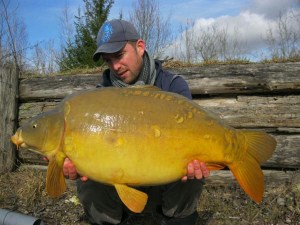 The second week of March saw my good friend Andy Lears and three of his friends, Tim, Mark and Chris on the venue. Andy returned to peg 11 where he had done well last May, Tim fished the next peg down while Chris chose peg 14 and Mark opted for peg 3 on the Croix Lake. This week sort of set the scene for the days and weeks to come, with fish being very localised. Andy struggled on 11 and eventually moved onto peg 5 where he was able to bank a few 20lb plus carp and a catfish. For Tim again the fishing was slow in the deeper side of the lake, but he did managed a PB mirror of 37lb 2oz.
Mark caught fairly consistently with fish to 31lb. Best result of the week though was to Chris on 14. He managed around 10 fish with the best being a new PB 42lb Mirror. 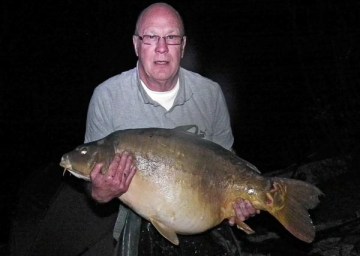 The later part of March saw poor weather with very cold conditions some early morning ground frost and despite a fair amount of sun the eventual degradation to rather wet conditions was able to get the fish feeding hard. The catfish were now on the move with a few getting landed on boilies and pellets. François Van Hooft managed a few nice fish both carp and cats, topped off by a cracking 47lb common.
Paul Jones opposite in  13, managed  7 fish including 4 thirties to32lb.

April Shane Hames and a group of five fished the Croix Lake. The weather continued to be unpredictable and remained very cold for the time of the year, with the rain becoming more present daily. The groups mostly fished PVA bags and 18mm boilies. They totalled 18 carp between 20lb & 30lb and one 30lb catfish. 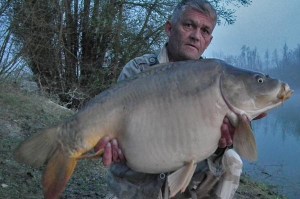 April continued with no real improvement in temperatures, but a considerable increase in rainfall. The tracks around the lakes became muddy and the water levels, although low for the time of the year started to rise. Dutch anglers Jan de Jager and G. Bruisma on peg 11 managed a 50/50 mix of carp and cats on boiles, with the best carp going 38lb and cats to over 50lb. Their catches were more consistent than others on the venue. Stu Rielly and his mates, Ian & Dan struggled early on, but still managed a new PB cat of 60lb to Stu, carp to 25lb for Dan, but Ian coming good in the end with carp of 28lb, 32lb, 42, and topped off with the twotone common at 48lb 13oz. 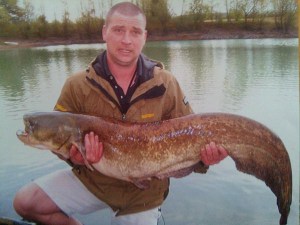 During the same period on the Croix lake, venue regulars Harry Van Leuwen and his mate Dennis de Vries managed a couple of carp per day finishing the week with a dozen fish to just under 30lb.

The last day or so of April saw the weather warm somewhat but the heavy rain has not abated and the consistent temperatures and conditions that are really needed for the results to be consistent have yet to materialise. The Spring weather has been all over the place and so have the catches. Curiously enough things were better in January.

One Response to March and April 2012 : Catch Report