Here is a very nice article sent to me by Mark Creswell. Thought I’d share it on the blog: 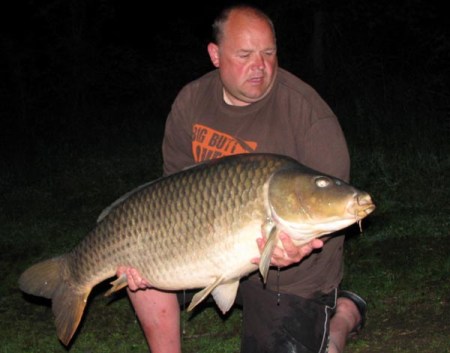 Friday 15th June is a special day for the river anglers but for me it was special as it was the day I set off, I meet my 2 companions for the week (Jeff and Steve) at Watford and we’re soon at Dover, a good crossing and then a drive down to Croix. We discuss our ambitions for the following 6 nights, I am hoping for a fish over 50lb as I’ve never caught one or if lady luck shone a 40lb common, Steve would be happy to beat his PB (27lb) and Jeff just wanted to have a good time, which in reality is what we all wanted, a good time with hopefully some decent fish thrown in too 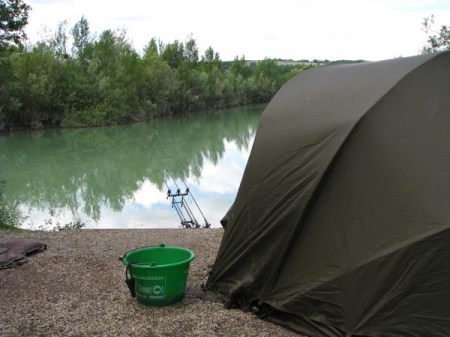 We pull into Croix about 10am and our host Gareth is waiting, pleasantries exchanged but we’re all chomping at the bit to get fishing. Weather-wise it was very hit n miss, rain, sun rain sun etc. Swims are sorted and I get the house set up and then everything else, Jeff calls me to say the kettle had boiled so was sat with him when we heard Steve shouting he was into a fish, we went round to his swim and it looked like he was into something decent, not too long later I’m slipping the net under our first fish of the trip. It’s a lump and we all say it’s a 40, on the scales it wasn’t quite the 40lb but a great start nonetheless. Just as we are releasing it, he gets a screamer on another rod and into his 2nd fish, he’s been fishing about 90 minutes! Once landed he has a cat on the mat weighing in at 47lb, WHAT A START! With that I get my rods out, I was in a corner swim and the margins looked incredible, so 2 rods on the margin and 1 in open water where I’d seen numerous fish crashing. 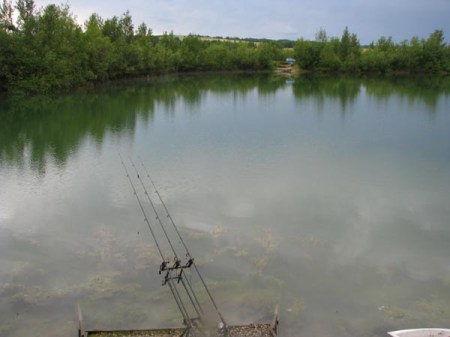 Do them margins look carpy or what

Early evening I get my first run, resulting in this 24lb10oz Mirror

Sunday morning I awake and just brewing up and have a take, the margin in front of me is about 8ft deep and whist the fish came in quite easily it didn’t want to come up and used the deep water to it’s advantage, not too long later I had it gulping for air and it was in the net, weighing in at 27lb 8oz not a bad size too

Later that afternoon bank an 18lber, so 3 fish on the bank so early on plus Steve and Jeff have banked fish makes me very hopefully for the week ahead. Monday arrives and my next action was about 4pm, as soon asI lifted into the fish it was obvious something bigger was on the other end but it was no match for my angling skills and was soon sending the scales around to 35lb 2oz 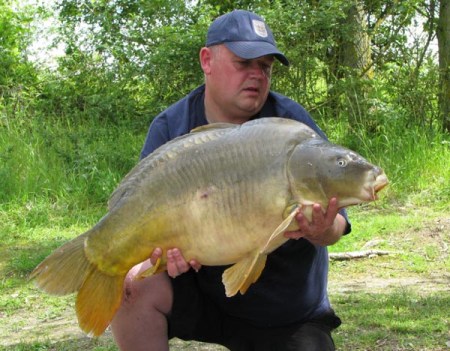 About an hour later the same rod is off and I think I’ve hooked an express train as it just ran and ran, eventually I managed to slow it don and turn and it came in quite steady, I’m hoping it’s a carp on he other end but he feeling is it’s a cat, the fish swirls and it’s a cat, once close in Jeff tries to net it but I’ve “only” got a 42″ net and we struggled so in the end he chins it, on the scales we wondered if it would go over the magic 50lb mark, the needle settles on 49lb 8oz, so no 50lb but still my biggest fish ever 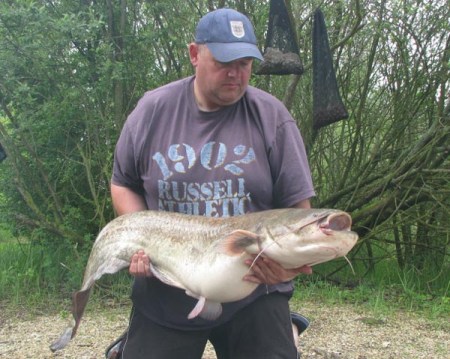 The next 2 days are a little slow, but I did manage a Crucian of around 3lb, yes a true Crucian before you ask, but a different strain from what we know in England. Wednesday we reeled in about lunchtime to do some sight seeing, we were in an area where there was a lot of action in the First World War and there were some memorials and graveyards. It’s something I’ve wanted to see ever since I’ve been going to France and so an opportunity not to be missed, whilst they are a brilliant sight and very interesting, also extremely humbling at seeing so many headstones 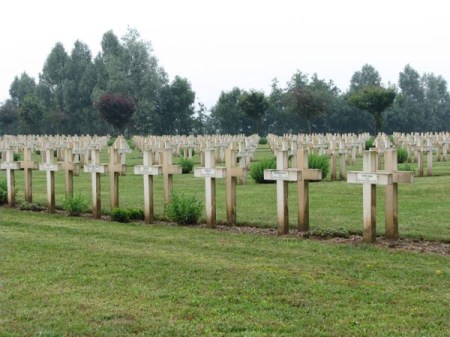 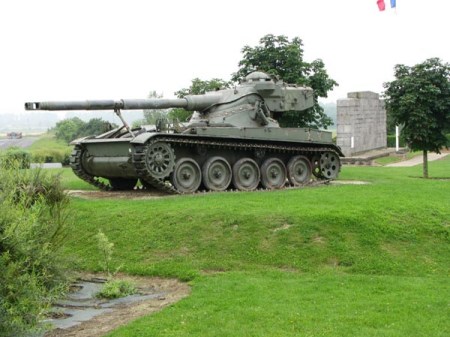 Thursday morning I’m up and not too long later my alarm signals a take, a spirited fight and we soon have a 34lb cat on the bank

a few hours later another cat tipping the scales at jut over 20lb is released. In the afternoon Gareth comes down to fish the feeder for the coarse fish that are in the lake, Crucians over 8lb, Tench over 11b, Rudd over 3lb plus double figure Bream and a few pike tha go over 40lb. Jeff calls me to say Gareth has a decent Crucian, a over 7lb I’d call it a whopper 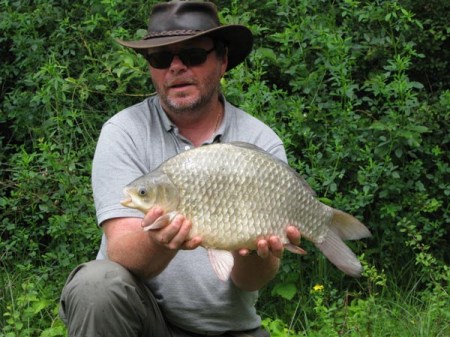 What happened over the next 2hours was something I don’t really want to experience again, as you see in Gareth’s picture it’s quite sunny, 20 minutes later it starts raining, so I shelter in my bivvy, another 20 minutes or so the wind is picking up and the rain is getting heavier, then it starts hailing and 5 minutes later the worst storm I’ve ever been in hits us! My pod gets blown over (as does everyone else’s!) and I daren’t venture out to do anything about it, thunder and lightening and I was a little worried. I have experienced some severe weather whilst in France, but this easily took the biscuit
The picture below is taken by just pointing the camera out the door, apologies for it not being level

The storm passes over and this is 30 minutes later, how mad is this weather of ours 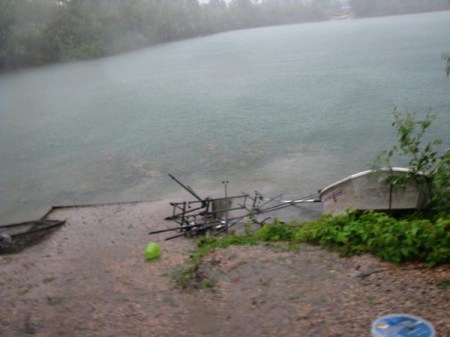 Thursday is our final night and Gareth cooks us one of the best meal I’ve eaten on the bank, before starting we all raise our glasses to Big Ron. Tales of Ron are swapped during the evening as the vino flows I then hit the sack with a heavy heart, it’s my last night and I want to stay another week Just after midnight my middle rod is off and I’m out the sack faster than a striking Cobra A decent battle and as usual once close in it doesn’t want to come up from the depths, I get a sight of it and think “oooerr, it’s a decent common” (or words to that effect ) I get it on the surface and at first asking guide it into the net, I look into the net and see a big fish I give Jeff a knock to come and help, on th mat and it looks even bigger, scales zeroed etc and we put her in the sling and then weigh her……………………….43lb 14oz, my biggest common and 2nd biggest carp. Yeeeeeeeeeeee Haaaaaa is screamed, Steve is rudely awaken and comes round to take the pics 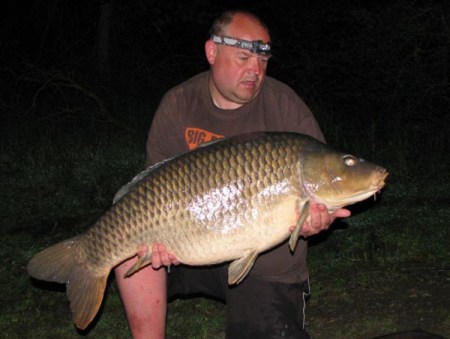 A beer is sunk in celebration and then hit the sack on a high. Fri awake and a slo pack down but still time for 2 more 20’s, a 22lb 6oz and a 21lb 4oz, bit of shame we had to leave as it was looking lik the fish were coming on the feed, so a pack up and now back to reality

plus 1 Crucian, 1 Tench and 1 Bream all around th 3lb mark

So, Croix Blanche, a lovely place, easy 2 1/2hrs from Calais and Gareth is very very helpful, a top place