One of the main Winter tasks on the fishery is stock management, or to be more precise, the ordering of new fish. 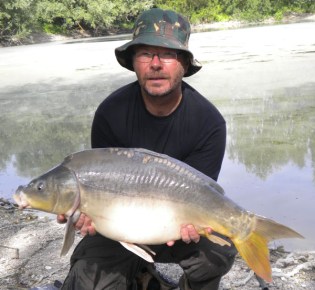 In France this means you have between November and March to get an order in with a reputable fish farmer and get your delivery of new fish. Now I’ve never been convinced that winter is the best time to stock, as it’s the time when the fish are at their most lethargic , are not feeding strongly are more susceptible to virus and if they do get a knock in the transport they will heal very slowly.

I do know though that the lethargic state of the fish is the main reason fish farmers chose this period to transport stock, as they do in fact damage themselves a lot less in very cold water. So I guess you have to roll with the way things are done here in France.

I add the stock to the stock pond, you’ll remember if you’ve read earlier posts on this blog that I received over forty 20lb plus fish in November 2010. These fish were introduced to the stock pond, fed over the winter and moved to the Croix Blanche lake in June & July 2010.

I had the help of my Dutch friend Peter and by simply setting up to fish we managed in fact to catch 50 fish from the stock pond, most of which were over 20lb, upto 25lb. This extra boost to the Croix lake made a big difference to catches, and helped stir up the existing stocks too. Some large bags of carp were had throughout August and September and two of the existing fish came out over 40lb, the best being a 46lb 5oz Mirror.

Following the ongoing stocking programme for the complex I reiterated this procedure by ordering 35 fish from Simon Horton, three year old carp weighing from 18lb to 27lb. Again these fish were introduced to the stock pond to over winter and will be captured in the same way by hook and line to be moved to the Tortue lake next summer.

The benefit of transferring the fish in summer is that they have a far higher tolerance to any viruses in their new environment and will have time to build up immunity during the hotter months.

Having discussed the matter at length with a French fisheries vet, he assured me that the warmer the water the better the chance of the carp surviving unharmed in the new lake. This was born out by the fact that all the fish transferred from the stock pond in July have survived the move. These fish should pile on the weight in the new water.