Posted on September 28, 2010 by croixblanche 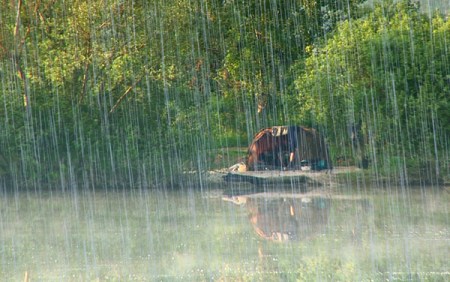 Well the end of the summer has certainly been damp here in northern France. I guess the writing was on the wall when we had a three day monsoon downpour in the middle of August, when usually we are sweltering under a heat wave.

This is in fact the last time I got my rods out. It was my wife’s birthday on the 14th of August and as it had been a nice day we decided to get a cake and a bottle of champagne and go down to the lakes and camp over for the night. All started off fine, with a marvelous strawberry gateau and a lovely bottle of Champagne that we had got from a local producer, one of the benefits of living in Champagne land.

With heads feeling a little dizzy and no carp to the lines, we hit the hay around midnight just a few specks of rain began to fall. 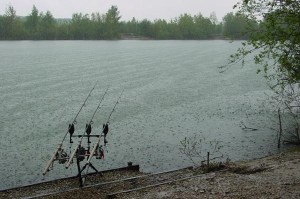 I was awakened in the night by a persistent run and the tap, tap, tap of rain on the bivvy. Well it was more like a waterfall actually. Anyway I was totally soaked by the time I’d landed and released a 10lb common…

Anyway the rain continued to fall and by midday the next day we decided to make a run for it and to abandon the bivvy. The rain continued day and night for over 72 hours. The lakes rose by 30 centimetres.  I felt really sorry for the anglers on the lakes at the time. Not quite the summer holiday.

The weather never really got much better, a few sunny days including the last days of the official summer before we were brought back to reality on the first day of Autumn with yet more rain.

I do hope we get a proper winter though, as the damp overcast days we have seen in the past in this region are really depressing. The last two winters have been quite cold with the lakes freezing over for long periods. A crisp cold winter seems more bearable than the grey drizzle. Perhaps it is to do with the sun light, but they certainly seem easy to endure.