Posted on September 15, 2011 by croixblanche 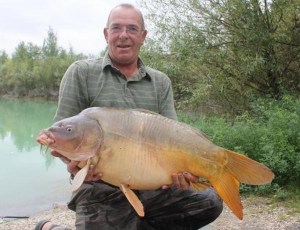 Following what was the hottest and driest Spring since records were kept, we moved into a month of July which proved to be the wettest and coldest in thirty years. The climate really does seem to be in complete turmoil. This in consequence has a knock on effect for the fishing.

With so much rain during July the lakes fished poorly in comparison to the previous ones. I believe that the influx of cold water, mostly through the water table, and therefore cold, caused the carp to moved up off the bottom and find a comfort zone in mid water. Groups of fish could regularly be sen in mid water. This made them very hard to tempt. Zigs were used with some success, but generally speaking things were not very productive.
I have over the years seen this on a number of waters, where July just in not a very good month for fishing.
Anyway we moved into August and things improved, with a mixture of cool cloudy weather with a few storms to hot sunny days. The fishing did pick up though and there were a few notable weeks where good numbers and size of fish were landed. 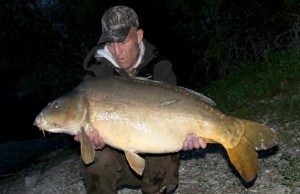 Paul Hamer and George Thomson, regulars at the venue, settled into peg 3 & 4 for the first week of July and with the cooler weather had a good week. Highlights for the guys were mirrors of 37lb 2oz, 34lb 10 oz and a Catfish of 33lb 12oz.
With the big cats now going over 100lb in the Tortue, Welsh lads Mark and Chris set out their stall using halibut pellets to tempt a large ‘Silurus’. They were not to be disappointed, banking a number of fish over 60lb, including two 70lb fish and a 85lb specimen, before banking one even bigger that bottomed their scales. Estimated at over 100lb it measured 2.10m. 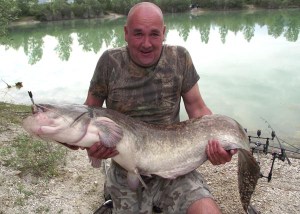 Belgian angler Danny de Clerk also had a good session on the same peg as the Welsh lads, banking over 35 fish during his week to over 39lb. He had several carp on zigs, even taking a thirty pounder in the dead of night on a piece of black foam.
As we moved into August the lakes seemed to pick up nicely. Probably the best catch on the Croix Blanche Lake was to my mate Laurent Amargé, who proved that correct use of a bait boat can catch you a lot of fish. As this was a family holiday from him his, wife and two sons, he didn’t fish nights but still ended his week with 25 carp to 38lb, and a dozen or so catfish to 26kg. Had he fished night too I am sure he would have had over 100 runs. At one point when I was with him he just could not get all his rods out without a run occurring. An excellent week and proof that the Croix Blanche can be a very productive lake. 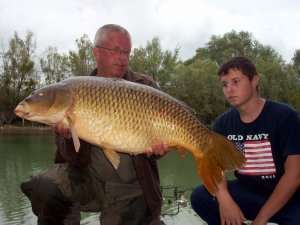 As we moved to the end of the month there were weeks when it just seemed to click. When this happens everyone seems to connect with a good number of big fish. Such was the case with the north of England lads Terry and Colin from Liverpool and Yorkshire boys Keith and Steve. Colin fishing peg 11 banked 15 fish with carp to 42lb, and catfish to 46lb. While Keith fishing opposite him had 13 fish including mirrors to 40lb 1oz, commons to 45lb 10oz and catfish to 66lb.
During the same period on the Croix Blanche the Dutch/English duo of Rutten and Barton managed a very creditable tally of 12 fish in 3 days the best being a 37lb Mirror.

Anyway as we move into mid September, I’d expect the results to improve as the fish feel the onset of winter and the need to pile on the weight for the colder months that are just around the corner.
See you next time.
tight Lines
Gareth